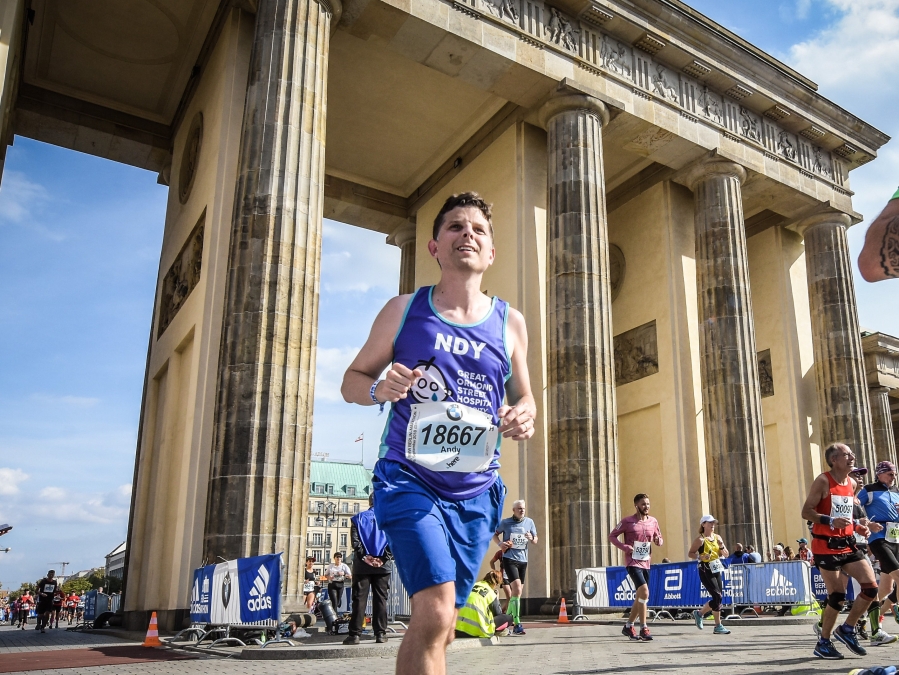 Over £500 raised for GOSH so far, and I beat my target time

Well it was quite an adventure awaiting me in Berlin and it lived up to its billing as one of the world’s top marathons. I flew into Berlin on the Friday evening before the race on Sunday and was staying in a B&B not too far from the airport.  I left Hannah and the kids at home – partly because it was term time for the kids, and as I was the only German speaker in the family, they probably wouldn’t have appreciated fending for themselves on the Sunday while I was running.
On Saturday, I made my way to the disused Tempelhof Airport in the centre where the expo was being held to collect my runners bib and timing chip.  I was very good and avoided any temptation to spend money on running gear!  I then couldn’t resist doing some sightseeing, although the wisest thing would have been to have just rested and kept the weight of my feet!  I went to Checkpoint Charlie and the museum next to it, grabbed some delicious pasta in a nearby shopping centre, and then visited the Holocaust Memorial and the Brandenburg Gate nearby.  My evening meal was yet more pasta and I attempted to have an early night!  Unfortunately I woke up at about 2am and never really managed to get back to sleep!
Raceday morning arrived, Sunday 16th September 2018 – 6.30am alarm, grabbed some porridge and jumped on the U-Bahn (underground) to Potsdamer Platz to the start of the race.  My starting wave was the largest and biggest group at the back.  The gun went off for us at 10am and I think it took me about 9 minutes to cross the start line.  (Click here for my vlog.) Overall the course was very flat but took some wonderful sights of the city – both east and west Berlin.  We were well watered on the course, although the German version of Lucozade was an acquired taste! (Let’s just say it was beetroot based!)  Super music was provided with all manner of bands playing and the support from the spectators was fantastic – of all nationalities.  I managed to meet some other GOSH runners during the race and after which was nice.  The race went really well until about mile 24, where I had a couple of walking breaks.  I was saved by the final refreshment area, which gave me the boost I needed to run the final mile or so to the finish line.  Chip time was 4 hours 29 minutes and 25 seconds – so just under my target of 4.5 hours!  I was so pleased!  And prayers were answered for my injured knee which held together brilliantly – wow.  And Eliud Kipchoge – I am in awe of what you achieved that day smashing the world record!
Thanks must go to all of my sponsors – thank you so much for giving up your hard earned cash to support GOSH.  It’s an amazing hospital – and anything to alleviate the suffering of the kids who need treatment there is a great thing.  My final word is this: I never thought I would be able to complete a marathon the first time around – but I signed up, did the training and turned up on the day at the start line. And you know what, I achieved a seemingly impossible feat. So I would encourage you to do the same if you haven’t already – dream big, and I know you too will be able to achieve something amazing. Go for it!